The 11th edition of the World Cup

The 2015 Cricket World Cup will be jointly hosted by Australia and New Zealand. The location of the games will be evenly split, with the day-night final match to be held at the Melbourne Cricket Ground on March 29.

‎Sri Lanka finally broke their World T20 jinx to finish champions, chasing down India's modest score of 130 for 4. Sri Lanka were beaten in the 2007 and 2011 World Cup finals and the 2009 and 2012 World T20 finals. Despite a belligerent 77 by Virat Kohli, India couldn't accelerate the score in the final overs due to Yuvraj Singh's excruciatingly slow innings of 11 off 21. The last four overs were a calamity for India as Kohli faced just eight deliveries and India scored only 19 runs. Skipper Mahendra Singh Dhoni came in with only 11 deliveries left and found it difficult to accelerate the pace of scoring.

Man of the Match Kumar Sangakkara become the fourth player after Sachin Tendulkar, Ricky Ponting and Jacques Kallis to score 25,000 international runs during the 35-ball 52 - his last T20. Virat Kohli won the World Twenty20 player of the tournament award for his 319 runs - including innings of 36 not out against Pakistan, 54 against the West Indies, 57 not out against Bangladesh, 23 against Australia and a match-winning 72 not out against South Africa in the semi-final.

Reported Earlier: Covers on at Mirpur stadium, and the final of the ICC World T20 between India and Sri Lanka is likely to be delayed because of steady rainfall.

India on the cusp of record treble

‎World ODI Champions India is looking to seal an unprecedented limited-overs treble when they meet Sri Lanka in Sunday's World Twenty20 final. After winning the 2011 50-over World Cup final in Mumbai - when Sachin Tendulkar was still part of the Indian team - MS Dhoni led India to Champions Trophy glory in England two years later. They now stand just one match away from becoming the first country to hold three major titles at the same time. Meanwhile, this will be the last game in the shortest format for Jayawardene and Kumar Sangakkara.

Kohli takes India into the Final

Virat Kohli scored 72 from 44 balls to help India chase down the 172 South Africa put on board after winning the toss and batting first.

Reported earlier: South Africa won the toss and elected to bat first against India. Faf du Plessis comes in for Farhaan Behardien for South Africa while Team India remain unchanged from their last match. Shikhar Dhawan and Mohammed Shami remain out of playing XI as Ajinkya Rahane and Mohit Sharma stays in the team. The first semi-final was disrupted due to rain and hailstorm, which resulted in a 27-run victory by D/L method for Sri Lanka, and the weather forecast for tonight predicts heavy rain once again.

In Dhaka, Sri Lanka made 160 for six, and the rain and hail which stopped play when West Indies were on 80/4 from 13.5 overs made sure the Lankans progressed to Sunday's final with a 27-run Duckworth-Lewis victory. The win was sweet revenge for Sri Lanka who lost the 2012 final to the West Indies in Colombo. Sri Lanka had raced to 41 in the fourth over thanks to Dilshan and Kusal Perera, before they lost three wickets in the space of 15 balls. Jayawardene was run out without facing a single ball. Dilshan made a run-a-ball 39 before he ran himself out.

Reported earlier: Lasith Malinga, who skippered the team in Sri Lanka's last group match against New Zealand, will captain the team in the absence of their first-choice skipper Dinesh Chandima. All eyes will be on Rangana Herath, whose scintillating figures of 5/3 against New Zealand in their final group stage match propelled the islanders into the semis.

India to play 2 Tests and 3 ODIs

India will play two T20s and seven ODIs between November 18 and December 15 three ODIS and two Tests btween Dec 5 and 30. The tour was severely shortened upon request of the BCCI after soured relationship with CSA CEO Haroon Lorgat. The Indian team will arrive in South Africa on December 2.

India crashed to a humiliating 10-wicket defeat in the second cricket Test after the batting caved in for the second time in the match, getting all out for just 223. They were 173/7 at lunch, a narrow lead of 7 runs in their second innings with Rahane was not out on 50 with Zaheer Khan on 2. Rahane went on to make 96 and was the last man out, giving the hosts just 58 to win the contest, which Graeme Smith (27*) and Alviro Petersen (31*) did with a consummate ease. South Africa sealed the series 1-0, giving a perfect send-off to Jacques Kallis.

South Africa were 299 for five at the close of play on the third day of the second test against India at Kingsmead on Saturday. Kallis, playing his final test match, was not out on 78.

South Africa's Dale Steyn, who had in the Wanderers Test recorded the worst figures of the career, produced a fiery spell to rock the Indian batting line-up with a six-wicket haul on day two of the second Test at Kingsmead. Steyn took six for 100 as India slipped from their overnight 181 for one to 334 all out.

Murali Vijay (91) and Cheteshwar Pujara (58) were at the crease when bad light stopped play on the opening day of the second Test match between India and South Africa in Kingsmead on Thursday. India had made 181 for one in 61 overs on a lifeless wicket with the loss of Dhawan's wicket.

Jacques Kallis, one of the finest all-rounders, has announced that he will retire from Test cricket after the Boxing Day match against India. The veteran of 165 Test matches made his debut 18 years ago, and has scored 13174 runs, taking 292 wickets and holding on to 199 catches.

After dominating the proceedings with bat and ball in Johannesburg for four days, India could eke out only a draw as the South Africans made 450/7 in the second innings and came tantalizingly close to creating history.

‎Shikhar Dhawan slammed 248, the second highest List A score ever, from 150 balls. His double century came in just 132 deliveries and included 24 boundaries and 4 sixes. He fell 20 runs short of the highest score in List A cricket. The record remains with Alistair Duncan Brown of England, who scored 268 off 160 balls for Surrey vs Glamorgan at The Oval on 19th June 2002. Pujara remained not out on 109, with India ending the innings on 433 for 3 in their must-win match versus hosts South Africa 'A'. In 19 ODIs to date, he has already struck three 100s, three half-centuries and averages 43.11.South Africa 'A' gave a great chase thanks to centuries from Reeza Hendricks (106) and Vaughn van Jaarsveld (108) before being bowled out for 394 in reply. India 'A' will now play Australia 'A' in the final of the tri-series on Wednesday, 14th August.

Tri-series Final: India 'A' vs Australia 'A'

‎India 'A' emphatically beat their Australian counterparts by 50 runs to clinch the Tri-series final of the Cricket South Africa (CSA) triangular series at the TUKS Oval in Pretoria on Wednesday. Opting to bat first after winning the toss, India lost two wickets in the first six overs, but the 108-run third-wicket partnership between Shikhar Dhawan (62) and Dinesh Karthik (73) pulled the innings back in India’s favour. But India lost their last five wickets for 14 runs as they recorded the third-lowest total of the tournament. 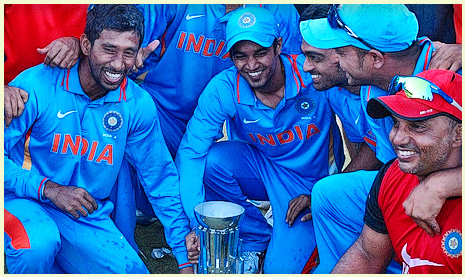 In Australia’s chase, Tim Paine (47) and Hazlewood (30) were the only ones to prosper in the face of some tight bowling from the Indian, especially the quick bowlers, who were able to extract slight extra bounce. Speedster Mohammed Shami (2-30) dealt initial blows, while Shahbaz Nadeem (3-34), Perveez Rasool (1-30) and Suresh Raina (1-33) kept the Aussie batsmen under tight leash. Australia were bowled out for 193 in 46.3 overs, handing India their fifth 'A' tournament victory since the concept was introduced in 1994.

The last edition of the tournament!

India beat Sri Lanka, will meet England in the final

England romped into the Champions Trophy final with a seven-wicket victory over a South Africa side who once again choked in a major semi-final. The Proteas collapsed to 80/8 before a 95-run stand between David Miller (56*) and Rory Kleinveldt (43) hauled them to 175. Jonathan Trott's 82 not out saw England, who have never won a global 50-over competition, across the winning line in the 38th over.